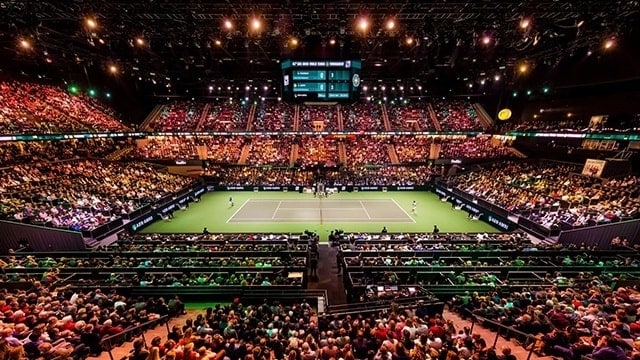 Here's your chance to use your Skywards Miles to watch the ABN AMRO World Tennis Tournament from the best seats in the house and experience our exclusive hospitality off court.

Besides the action on centre court, the tournament also offers an extensive entertainment programme, including light shows, music performances and more for the whole family to enjoy.

Here's your chance to use your Skywards Miles to watch the ABN AMRO World Tennis Tournament from the best seats in the house and experience our exclusive hospitality off court.

Besides the action on centre court, the tournament also offers an extensive entertainment programme, including light shows, music performances and more for the whole family to enjoy.

• Your use of the match tickets is subject to the ABN AMRO Tennis Tournament General Terms and Conditions which may be viewed here. By using the Tickets to attend the (“Match”) you are deemed to have accepted the Ticket’s General Terms and Conditions.
• The value for redemption starts at 3,500 Miles for a seat-only ticket and 7,000 Miles for a hospitality ticket.
• This offer is valid up until 12 January 2020, 23:55 hours UAE time.
• Members can only avail a pair of tickets for any one of the match days.
• Miles redeemed are non-refundable.
• The Tickets are for use by you and your chosen companion only and cannot be used for commercial or promotional purposes. You may not sell or transfer or give away in any circumstances or manner whatsoever the Tickets allocated to you under this promotion, even if you are unable to attend the Match.
• The Tickets include nothing other than that expressly stated to be included as part of the Ticket. The Ticket holder will be responsible for his or her own return airfares, accommodation, visa requirements and transport to and from the Match and any other ancillary costs associated with utilisation of the Ticket.
• Once the winner redeems his/her Skywards Miles, these Miles need to be valid for minimum a month after the registration/redemption closes. If the member requests for a refund of Miles for any reason and the Miles have expired, they will not be reinstated/refunded back to the member’s account under any circumstances.
• All members who redeem their Skywards Miles will be contacted by Emirates via email and provided with Ticket collection/delivery details.
• Match Tickets are valid for the specified date and time only.
• The Match schedules are subject to change for any reason including but not limited to weather conditions or change in overall Match schedules. Please check the final dates and times of the Matches on the official ABN AMRO World Tennis Tournament website prior to the respective Match.  Emirates cannot be held liable for any change in the date or venue of the Match. Therefore, Miles redeemed will not be refunded in this situation.
• Emirates shall not be liable for any failure to comply with their obligations where such failure is caused by events outside their reasonable control, including but not limited to, weather conditions, fire, flood, hurricane, strike, industrial dispute, war, hostilities, political unrest, and riots or any other circumstances amounting to force majeure.
• Emirates accepts no responsibility for any damage, loss, liabilities, injury or disappointment incurred or suffered by the Ticket holder as a result of purchasing the Ticket. This exclusion does not include any liability for death or personal injury caused solely by the negligence of Emirates.
• Emirates Skywards Programme Rules apply.
• Tickets are being offered on a first-come, first-served basis.
• These tickets are non-exchangeable, non-transferrable, and non-encashable.
• Please refer to the official website for more information on the event terms and conditions for each tournament.

Redeeming Miles for your chosen session automatically generates your confirmation email. A separate email will be sent to your registered email address with details on the event and a location map. A link will be attached to this email for you to provide your guest's name and details.